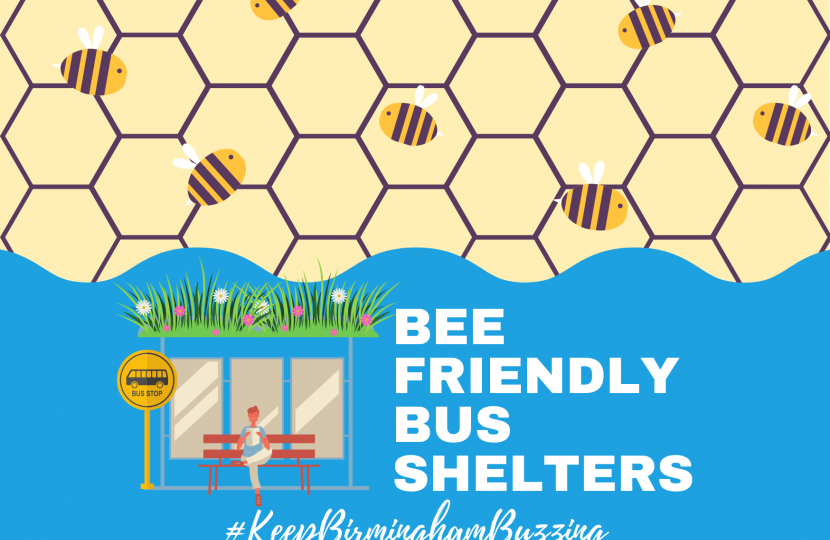 The Conservative Group have pledged to introduce bee-friendly bus shelters if the group take control in 2022.

The announcement is also made alongside the pledge to ban the use of a glyphosate weed killer that the City Council have been using which is known to cause harm to bees.

As Bees Needs week comes to an end the Conservative Group have today pledged to introduce bee-friendly bus shelters to help support the bee population as well as adding more greenery to the city should they win control at next year’s local elections.

The bee-friendly bus shelters will be planted with a mix of wildflowers, attracting pollinating insects and positively contributing towards the city’s biodiversity whilst bolstering Birmingham’s climate resilience. The group would take lessons learnt from Leicester City Council who have started to introduce the bus stops across the city.

Further to the bee-friendly bus stops, the group have also pledged to end the use of glyphosate-based weed killers which would bring Birmingham in line with 40 other councils across the nation. In response to a question raised by the Conservative Group, the council admitted to using 13,588 litres (c. 24k pints) of the weed killer since 2018 despite causing harm to bees.

Shadow Cabinet Member for Transport and Environment, Cllr Timothy Huxtable, added: “Increasing the city’s biodiversity is vital, this is just one of the many measures, such as planting city trees, green walls and encouraging green roofs, that the group will introduce if we take control of the Council in  May 2022.”