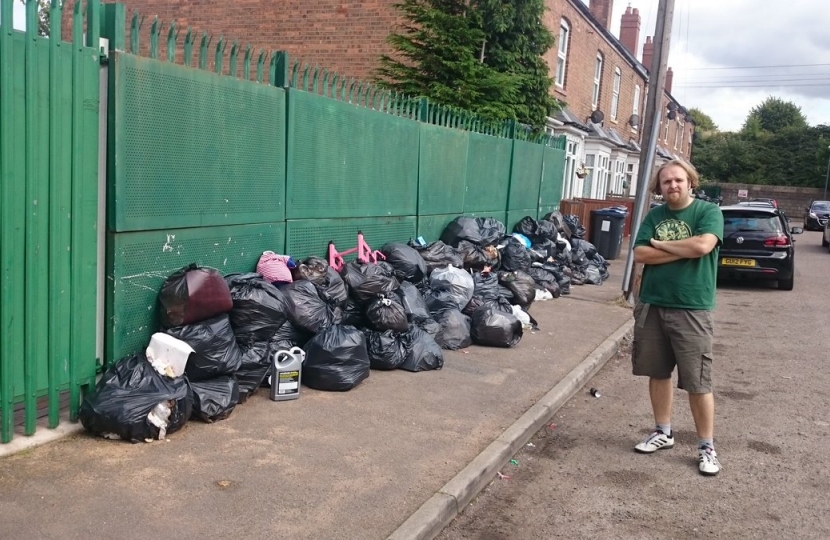 Following 221 days of formal dispute with the Unions and a summer of misery for Birmingham residents, which left 22 double decker buses worth of rubbish a week across Birmingham's streets, Labour run Birmingham City Council has given in to Union demands putting council finances at severe risk and rendering the chaos of the summer completely unnecessary.

The bin dispute hinged on the deletion of over 100 Grade 3 ‘Leading Hand’ roles working on waste collection, to be replaced with an equivalent number of Grade 2 posts that were, the council claimed, more appropriate to the level of job required. A behind doors deal allegedly struck by former Leader John Clancy then became the subject of expensive court action as Unite the Union tried to force the Council to back a deal that senior finance and legal officers warned was unaffordable and illegal. With Court action due to start again next Monday, the Council have now seemingly caved in to those Union demands with all Leading Hands now being offered posts working on the same lorries at Grade 3.

“of course the Council are only in this position because the former Leader left the Council in a situation which put them at substantial risk of losing legal action. Keen to avoid this, and also to avoid having to air all their dirty laundry in public via the courts, the Council have now had to settle on something it previously ruled out all because of the failure of the Labour administration to take decisions properly. It is now clear next year's waste budget will be significantly overspent and no doubt this is the justification Labour will use for their planned introduction of fortnightly refuse collections from 2019 or earlier".

“221 days after the commencement of the formal dispute with Unite – a dispute the former Leader described as two sides of the Labour movement in the City arguing with one another – the residents of Birmingham have been left with a bill of at least £6.6m for a dispute that could have been settled much earlier if all they were going to do was to give in to the demands of the Union.”

“The portfolio holder for waste, Councillor Lisa Trickett told the chamber that it was not acceptable to have afforded too much power to a small group of men just because they have the industrial muscle to leave rubbish on our streets and she referred to the number of female workers in libraries and social care who have left the council without being afforded the same chance to change the direction of change and improvement purely in order to save their own jobs. Today you have to wonder how those former employees are feeling when they see her back track on this stance in an attempt to save her own political career.”

Referring to the details contained in the report that was tabled very late at the Cabinet meeting, Councillor Robert Alden said:

“There is no way that such a substantial report could have been properly considered by Cabinet before they agreed it. There are serious implications arising from the proposals and yet the report was late and incomplete. Cabinet are making a decision which could have profound implications for the future of council finances and it is simply not acceptable for it to be made in this way. We need a Council that the City can be proud of, today once again takes us further away from that. ”