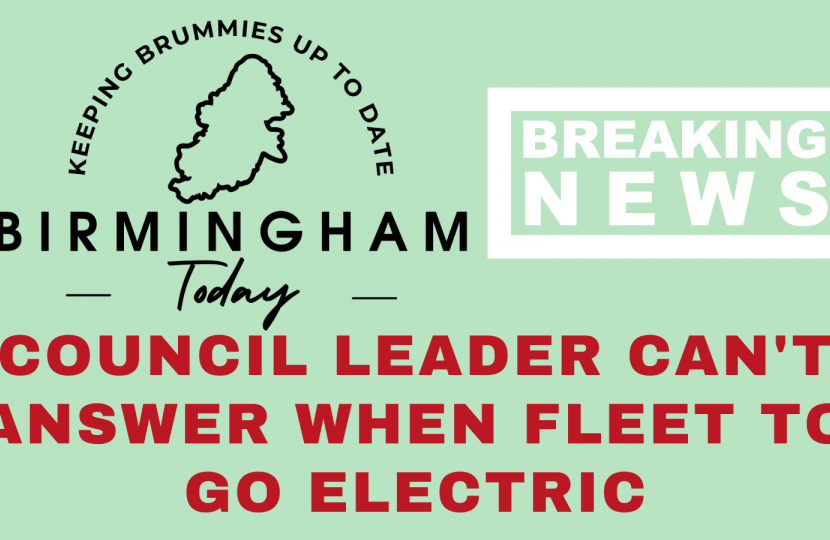 With Birmingham City Council now reportedly owning fewer electric vehicles than it did in the 1930s and The Birmingham Declaration, issued on 1st December 2009 by the then Conservative-led Council, committing the Council to procure only electric or liquified petroleum gas vehicles by 2015 being missed, at the meeting of the Full Council today, the Leader of the Conservative Group, Cllr R Alden, pushed the Leader on when he finally expects the Council to only purchase electric or LPG vehicles moving forwards given the Council is already six years behind the target.

Cllr Alden sighted Cllr Olly Armstrong’s comments from earlier in the week when he said, “the people in power have no idea right now.” Pointing out that when the Conservative and Liberal Democrats ran the Council the Birmingham Air Quality Action Plan had a clear plan in place to clean up the city’s fleet, with a clear deadline of 2015 set. Sadly, since Labour took control of the Council in 2012 they failed to implement this plan and in 2021 they removed the target to electrify the City Council fleet and failing to lead by example and hampering efforts to meet the net zero pledge of the Council.

It was also raised that the City Council has decided to spend £13.5m moving the Montague Street depot out of the CAZ ‘Travel tax’ zone to avoid charges rather than upgrading the refuse trucks to electric vehicles. The Council could have afforded 25 electric vehicles and the associated charging infrastructure. This will mean that instead of less pollution being delivered it is simply being displaced to suburban areas instead.

“I asked the Leader a simple question, when will the Council start buying only green vehicles such as electric vehicles? The fact that he admitted he was unable to give a date is concerning. Six years after the Council was meant to have committed to electrifying the Council fleet, they have no plan, no progress and no target even anymore. The eyes of the World are looking at the UK as we take the COP Presidency, Birmingham needs action now and all Labour are interested in doing is moving a depot and the associated pollution to the suburbs to avoid fines.”