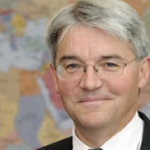 Member of Parliament for Sutton Coldfield
Andrew Mitchell was born in 1956 and is married with two daughters. He was educated at Rugby School and Cambridge University, where he studied history and was elected as President of the Cambridge Union in 1978. Andrew served in the Army (Royal Tank Regiment) before joining Lazard where he worked with British companies seeking large-scale overseas contracts.