Andy Street has led the region to win over £1.7billion of extra funding from the Government.

Help stop local homes being turned into HMOs in our area. Sign our petition now! 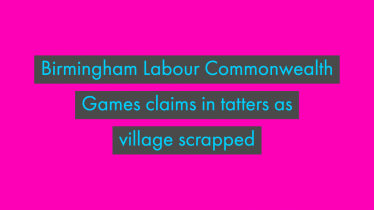 Labour run Birmingham City Council’s plans for an Athletes Village for the Commonwealth Games in 2022 have been abandoned with the Government stepping in to ensure that athletes can be accommodated during the £750m event. The Athletes Village, that was due to be built in Perry Barr near to the stadium, has been beset with problems from the outset, including the purchase of a bus depot coming in at 8 times the original budget.

Four year delay to Air Quality Action Plan highlights priorities all wrong for Birmingham Labour as they push ahead with travel tax.

Birmingham Conservatives have slammed the Labour Council’s plans to introduce

Do you want to stop illegal encampments? Then sign the petition.

Help stop local homes being turned into HMOs in our area. Sign our petition now!

More and more family homes are being turned into bedsits and flats. These are…

Please take our survey and give us your views on how we can make Birmingham an even better place to live.

By joining us or getting involved you can support our plans to help hardworking people and help us to build a better future for Birmingham.

We rely on the support of individuals like you.