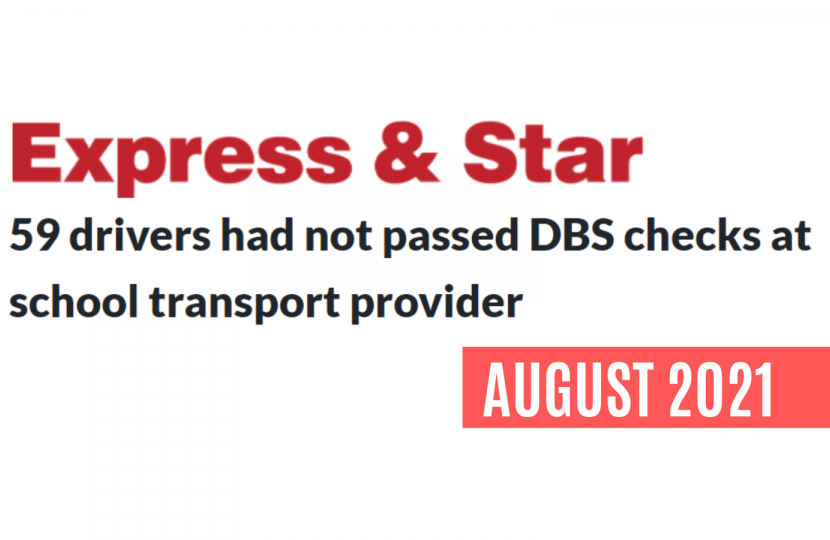 Despite repeated reassurance that the crucial DBS checking and monitoring system have been overhauled and promises that there will be no repeat of last year’s failures which included potential sex offenders driving buses with children on, it now has been revealed, that more drivers with positive DBS checks have been discovered working as recently as this summer term. Furthermore, two weeks before the start of a new term the contractor was found to only have valid DBS records for 51 of 110 employees, of which at least 14 employees returned positive DBS checks (A positive DBS Check contains criminal information as notified by the DBS). Only following further checks was it discovered that fraudulent efforts were made by the contractor to circumvent the new monitoring process.

The firm, North Birmingham Travel, caused a scandal in neighbouring Sandwell after:

Birmingham City Council had already awarded the £400k contract here in Birmingham, but when allegations arose in July Cllr Alex Yip called for a review into the contract. Failings in the service and warnings around the consequences of the council failing to DBS check drivers have been raised by the opposition group numerous times (Timeline at end of this release).

The firm has been operating the service for a number of years and the discovery of yet more drivers with positive DBS checks, driving the city’s most vulnerable children, calls into question the impact of the changes the city council have enacted to prevent this from happening again. It also means that categoric assurances that every individual in the service in contact with children had a fully cleared and approved DBS check and the children in our city were safe was false.

Cllr Alex Yip, Shadow Cabinet Member for Children’s Wellbeing added “This further safeguarding failure for children with sometimes significant disabilities is appalling on several fronts. Families were given a firm promise that this would not happen again, and everyone had a clear DBS check. We were told the DBS checking and monitoring process has been vastly improved. We were promised that children will have a safe and efficient service to and from their schools in September. Now, two weeks before term starts, we find out that over 800 children on hundreds of routes will ha, and the reformed DBS checking service has allowed drivers with concerning DBS checks to be left alone with potentially uncommunicative children with learning disabilities on their way home once again. Parents must be able to trust that Council are keeping their children safe, but time and time again the promises from the Leader of the Council are proven false and his apologies hollow. Residents must be told how many months these drivers have been transporting children, how they were allowed to start driving before checks were approved, and where the changes made have again failed parents in the city.”

Conservative Group Leader, Cllr Robert Alden, added “SEND children and their parents have now suffered years of failure at the hands of this Labour administration. They have left child after child at risk with empty promises and lacklustre reform. If it was their child being sent off this would have been solved in a heartbeat – it should be no different for these children. Despite the oppositions best efforts to get to the truth the Labour Cabinet have hidden the risks, hidden the failures but exposed hundreds of children to these drivers.”

The group have now demanded that the Council release the full number of failed DBS staff checks within the Home School Transport service over the last 10 years allowing proper scrutiny on such a serious issue.